Want to learn more about the guys who work at the studio?

They’re normally busy working away behind computer screens and mics and not really ones for getting front and centre, but Angus and Chris make Gran’s House what it is. They help create an amazing space for their clients and as they are both musicians, truly understand exactly what their clients require from their recording space.

Angus has been experimenting with sound recording & music production for the past 20 years. It all started when given the option of taking a record company advance to pay for studio time to record an album, or buying some audio equipment and doing it himself. Armed with only a few microphones, a laptop and a Digidesign 002 interface, he recorded the critically acclaimed album ’18 months later’. Soon after he was asked to start recording and producing albums for other musicians on the Scottish traditional music scene.

In 2007, he opened Gran’s House Studio. He has since never stopped creating new music in this space, as well as building the studio into what you see now. A recent highlight has included producing and recording the 2017 Skinny’s Scottish album of the year ‘The water of Leith’ by Blue Rose Code. Angus is also a member of Blazin’ Fiddles and The Halton Quartet and has also recorded & performed alongside Yusuf Islam (Cat Stevens), Paul McCartney, Bobby McFerrin, Craig Armstrong, Blue Rose Code, Eliza Carthy, Bella Hardy & many more.

Chris has been into recording/mixing/mastering/general studio geekiness for most of his musical career. If we’re going way back, he started playing bagpipes when he was at school in the Scottish Borders before he went to Plockton Music School for a couple of years and then on to study a BA Applied Music at Strathclyde University. While he was at uni, he made full use of the recording studios there and his love for all things recording began.

Over the last 10 years, Chris has gone from recording in student studios at uni to recording and mixing in a home studio, and eventually working in studios around Glasgow. Having known Angus for a long time, he moved all his gear to Gran’s House and has been working there since 2013 and loves it. Ask Chris anything you like about recording/mixing/audio geekery but prepared for a long conversation…he really likes this stuff. 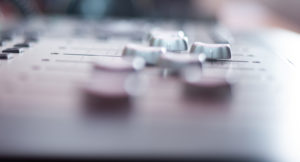 Why Record In A Studio?

Sign up to receive our newsletters! We won’t fill up your inbox or share your details, and we always release promos to our mailing list first. Join now to make sure you get first dibs!